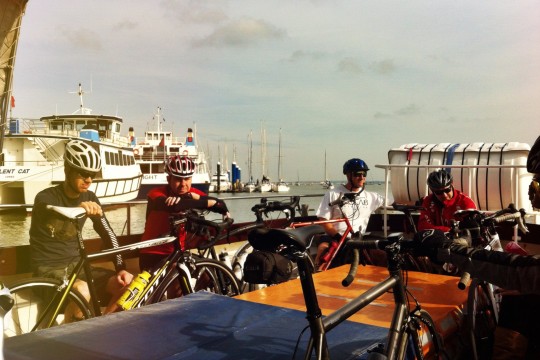 Blue skies and spring flowers peppered this year’s perfectly sunny Isle of Wight Randonnee.  The few puffy clouds and breath of breeze made conditions perfect. We sailed through a morning out east, whizzing round corners with other riders, and bingeing on tea and flapjacks at the Bembridge checkpoint.

Tom borrowed a speedier bike than his usual Dawes (thanks Dad!).  His super-skinny tyres urged us on and we rode faster than any previous year.

With so many cyclists on one route, there’s always someone to slipstream or overtake in a rash moment of enthusiasm; but everyone gave each other plenty of room (bar the one gentleman who swung wildly in to the middle of the road, almost causing a lycra-clad pileup.) 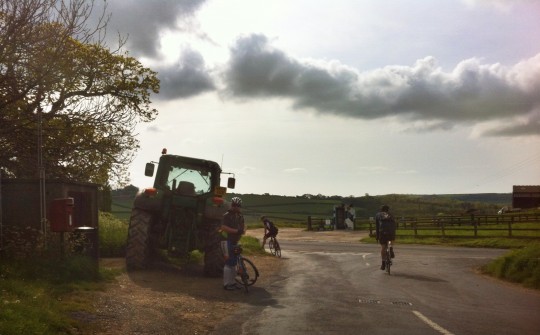 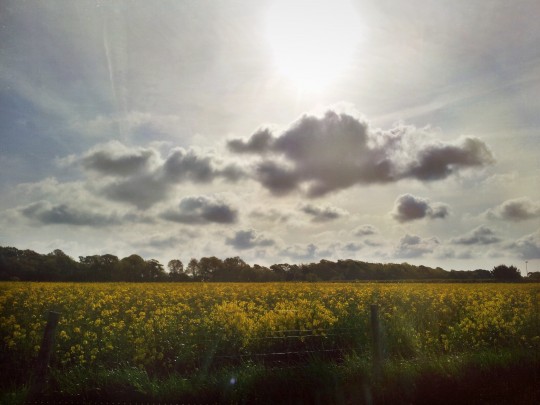 The sun shone shone all day and, thinking back, I don’t know how I didn’t find the excuse to have an ice cream. Next year I must remember to stop at Compton Beach for a Mr Whippy before the big climb up the Military Road. 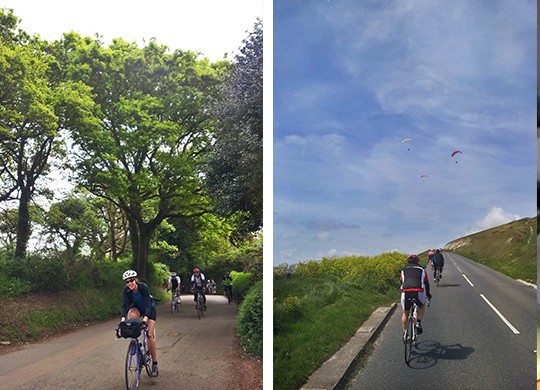 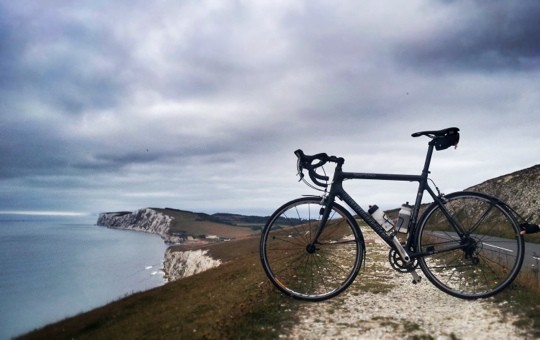 Yesterday was very nearly a pyjama day.  It was grey and uninspiring, and I ached a bit from too much of this yoga challenge.  We’d had the Cycle the Wight event in our calendar for months, but bed on a Sunday morning is a hard thing to quit.  I’m so good at saying ‘Nah’, ‘Maybe next time’, or ‘I’ll think about it.’  Sometimes thinking is a really bad idea; what if we just said Yes?

I waved Tom off at the door to cycle the 100k route on his own, and got back in bed.  But knowing that he was off playing outside without me kind of ruined my lazyman buzz.  It took me all of five minutes to regret my hasty ‘No’ and start tearing around the house looking for lycra, socks, and other sundries.  I sent him a quick On My Way! text and raced down the hill.

It was a perfect autumn day: still and clear, damp and earthy. I was glad I’d made it out of bed.  Those grey days always feel uninviting, but they’re really rather lovely once you’re out in them.  After an hour of hard pedalling (Tom had a fast bike and a half hour head start) I found him sat on a hilltop bench, munching on a banana and grinning at me.  We spent the rest of the day riding this familiar route, having a grand old time.

A last minute mad-dash change-of-heart is not the best approach to a long-distance ride. My legs were tired after that first 30k hard push.  But I had a perfect autumn day out in the fresh air with my man.  I’m at risk of missing all the fun if I automatically say ‘No’ to a challenge.  So, I’m going to try to say ‘Yes’, ‘Definitely’, and ‘When do we start?’ before I have the chance to come up with a decent excuse.  We’re likely in for plenty more uninspiring grey mornings this autumn, but if we just head outside we may find they’re all still pretty fabulous. 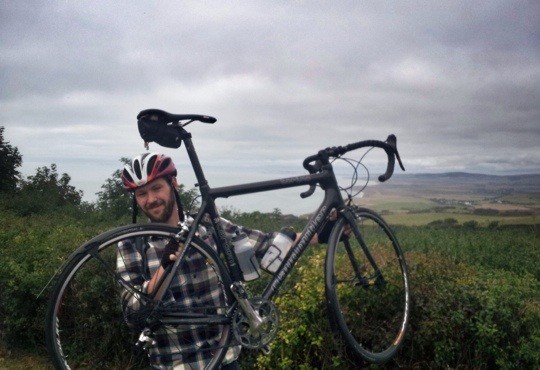 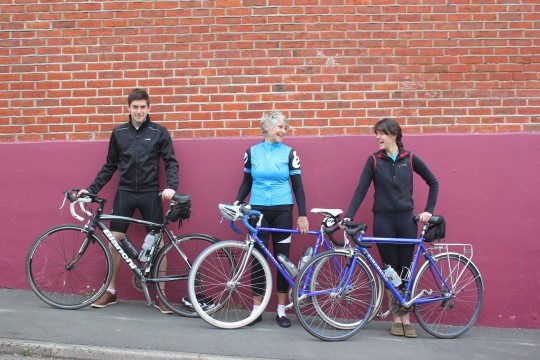 Tom and I had some new additions to Team Prust this year, for our usual spin around the Island (previously, and previously again).  We joined the other 2000 riders for a day of perfect sunshine, dry roads, and spinning spokes.  Riders arrive in their droves from the mainland to join in this relaxed cycling allsorts ride, and it’s always a treat to hear unfamiliar visitors raving about the beautiful and varied Island roads.

Our North coast route took us up and down (and up again) through damp shady woodland, before rounding the corner to a fabulous view of St Helen’s Bay, and a flat spin along Bembridge Harbour.  After topping up on tea and cake we headed through the narrow lanes beyond Brading and out on to the South coast road above Ventnor.  Bicycles littered the road at the Whitwell pit stop, where we grinned at the drivers in their hot tin boxes.  A long steady climb up to St Catherine’s Point, a steep descent down to the breadbasket of Atherfield, and out on to the coast above Compton.  Riders less fearful of a puncture than I took the gravelly trainline path past the estuary to Yarmouth, before the final eastward push back to Cowes, with the wind at their backs.  We didn’t escape the puncture fate, and the four of us spread out at our different paces.  But regardless of how closely your team sticks together, on this ride you’re rarely out of sight of another friendly rider. 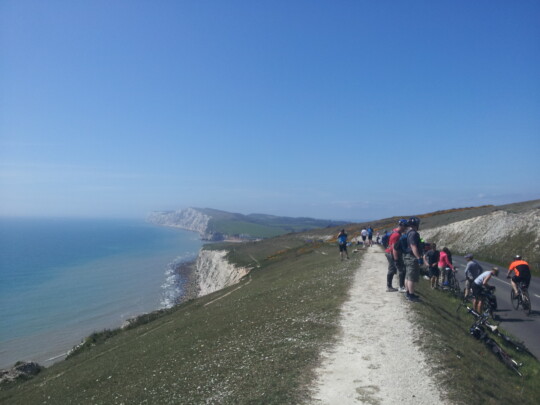 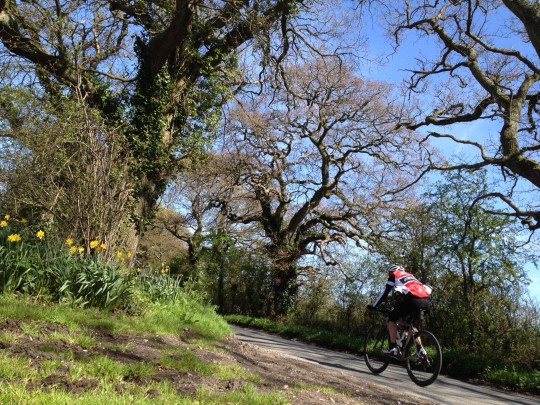 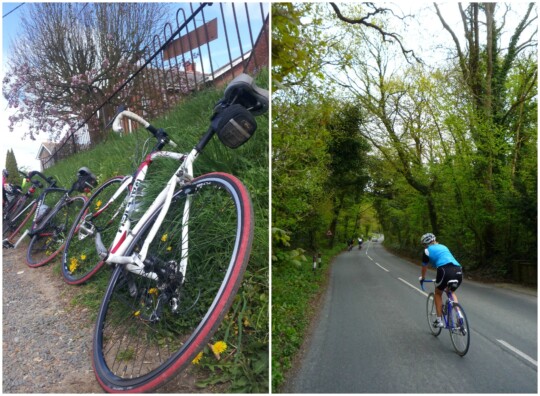 With events like this, and next week’s Walk the Wight, we delight in showing off this fabulous dot in the Solent.  I only wish every day the bikes would outnumber the cars so dramatically. 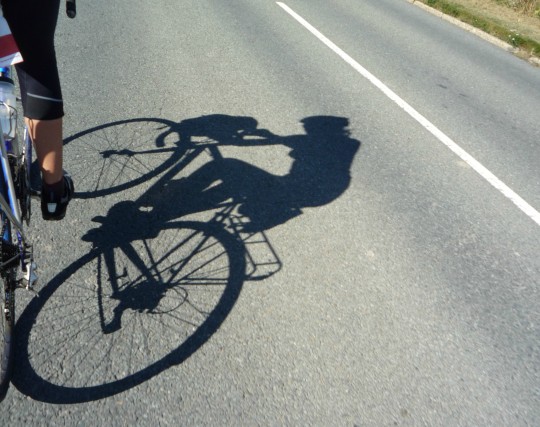 Somehow cycling around the Isle of Wight in May wasn’t enough for this year, and on Saturday morning we found ourselves once again setting off on the chain ferry to register for the 110k route around the Island.  This sunny September day was in sharp contrast to our previous wet ride, and a perfect celebration of Autumn.  It wasn’t a ride for stopping and taking pictures.  But, Tom did a great job at balancing camera and handlebars for some snaps from the saddle. 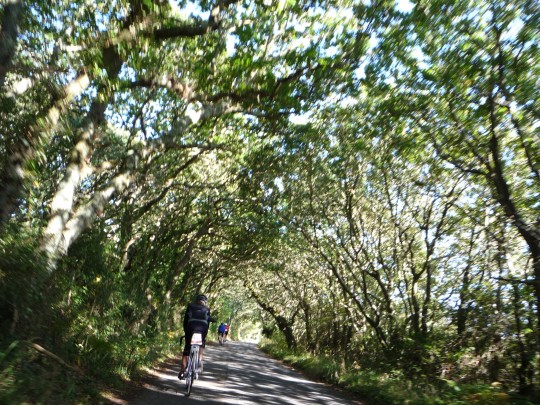 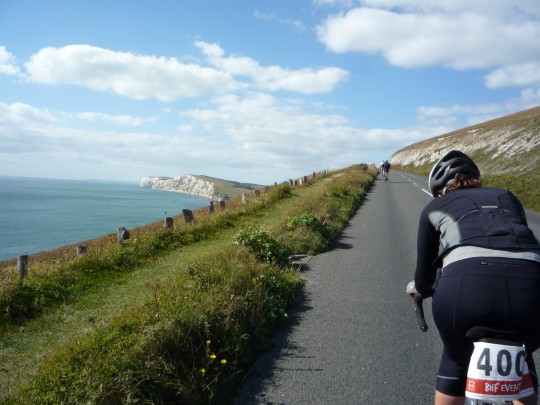 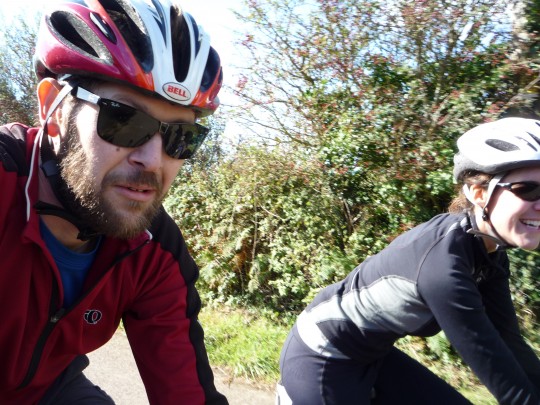 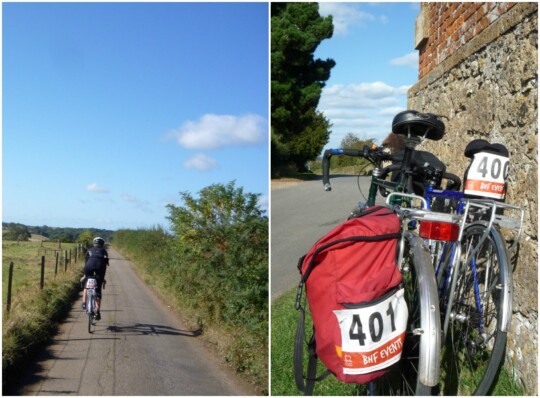 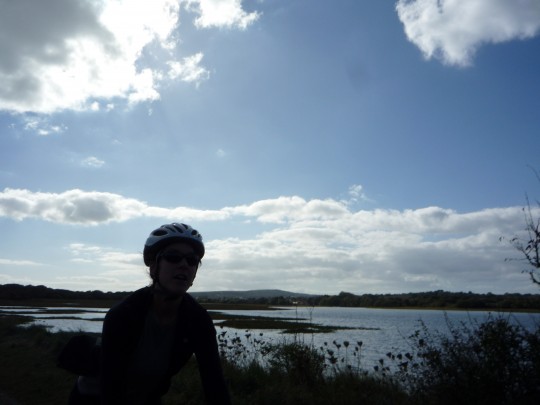 I love this ride in any weather, but it is all the more delicious in the sunshine. 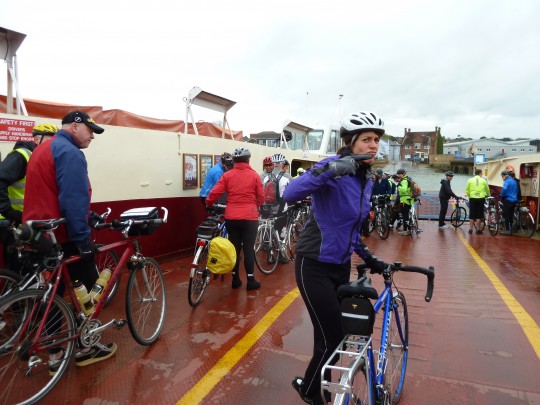 May has arrived, and with it two unmissable local outdoor events, the first being the Randonnee: the annual 100k bike ride around the Island.  I’ve spent the last couple weeks talking up my plans, so when I woke to heavy rain this morning I was way too proud to bail.  Any day is off to great start with a ride on the chain ferry, which was pleasingly closed to cars for the day.  (It doesn’t bode well that I’m pointing in the wrong direction in this pic.) 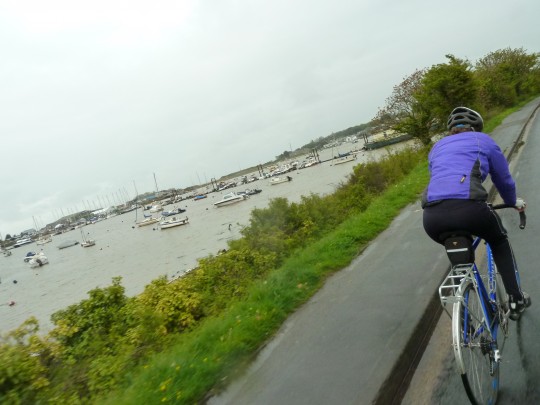 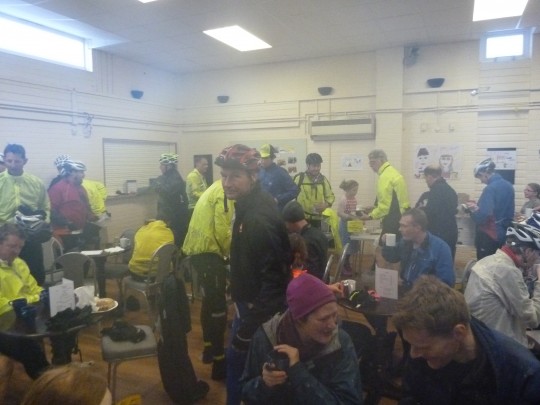 It was a wet and windy ride to Bembridge, with the inevitable hoards of club cyclists zooming past amidst talk of gear ratio and carb-loading.  The crammed football club was a welcome first pit stop and I wolfed down a brownie (but later regretted not filling up on proper calories.  Maybe those lycra guys speak sense…) 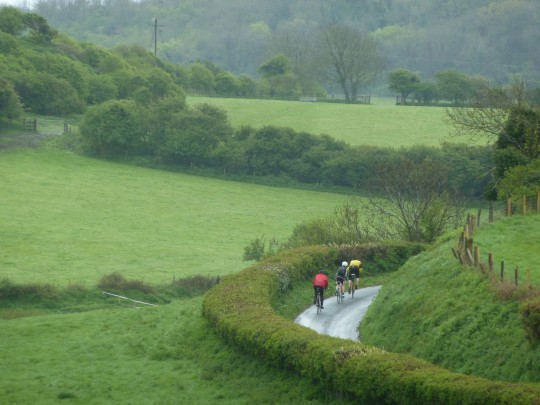 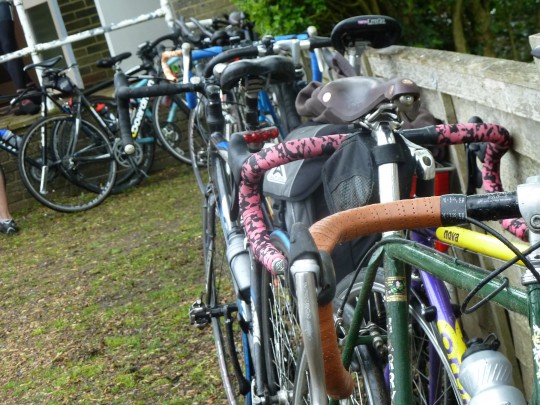 A little let-up in the rain on Brading quiet road (and a few altercations with a 4×4 who hadn’t got the memo) and a tea and cookies stop at Whitwell, where we set some guys off in the right direction after they found themselves on the 100k route, having only signed up for 55.  The bikes were two-deep on every fence, but with so few girls on the ride there was no queue for the loos.  Result. 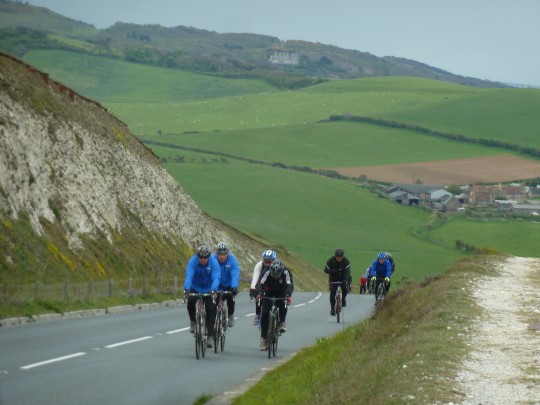 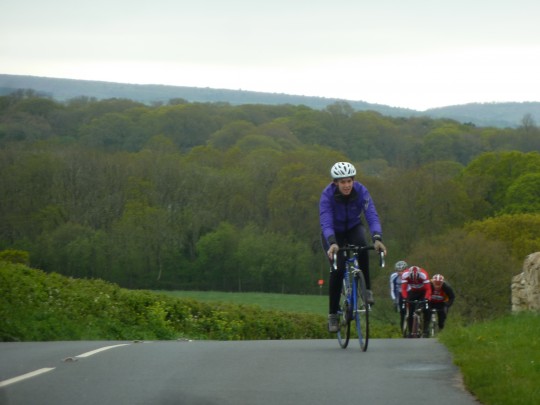 There’s no denying this is a hilly ride, and the coastal stretch along the Military Road slows down all but the most hardcore.  By Rolls Hill I was weaving in fatigue and those guys on my tail weren’t behind me for long.  But by the time we’d reached Cowes sea front I’d found some last reserves of energy for a victory lap through the town, with all the other muddy and knackered two-wheelers.

Another year, another Randonnee.  No doubt next year we’ll be at it again.  Meanwhile, there’s the second big outdoor event of May to look forward to next weekend… 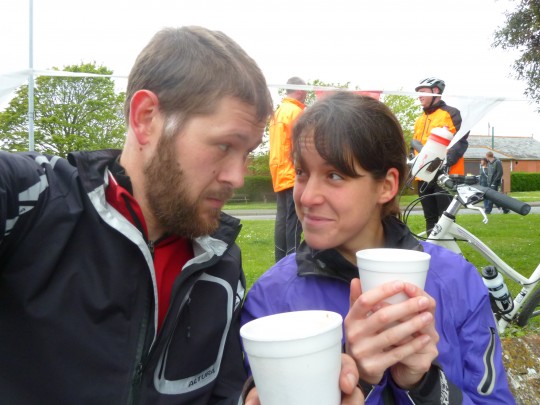