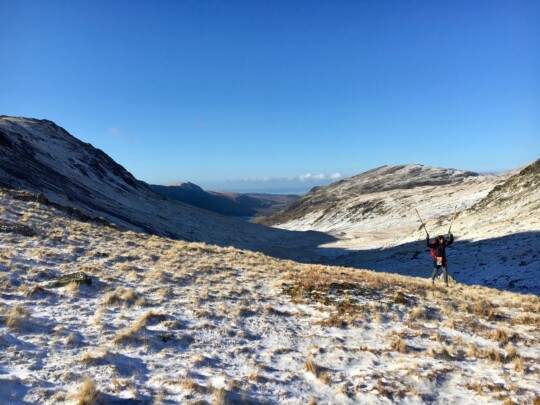 In our part of the country a white winter is far from guaranteed. But perhaps its infrequency and unpredictability is what makes it all the more magical. When snow does come our way there’s an implicit demand to make the most of it.

Earlier this year we drove through the night and arrived in Wast Water for first light. It hadn’t been a particularly wintry drive and we didn’t expect to see snow-dusted hills when we finally arrived. It did look rather beautiful as the sun lit up Scafell Pike across the water. 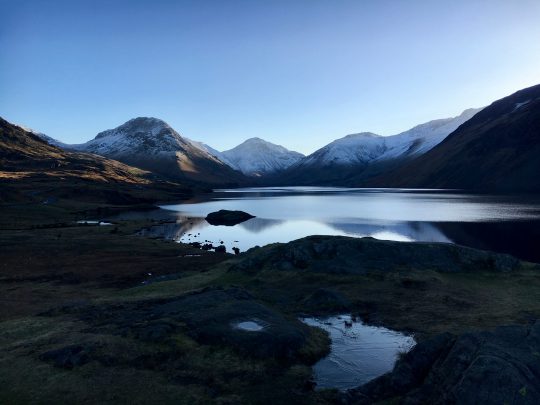 Heading through the first stile at the car park’s edge, we stomped our woolly socks hard inside our boots, trying to wake up numb toes. We slogged up the dark valley beneath Yewbarrow, opting against the top ridge path with its icy stones and our dicey dog. A little snow to our southern sensibilities makes everything seem a little treacherous.

We were aiming for the notch below Stirrup Crag at the top valley far ahead, jumping between tufty drifts of snow and sludgy sheep prints with icy rivulets running beneath. No clear path, but a definite destination. 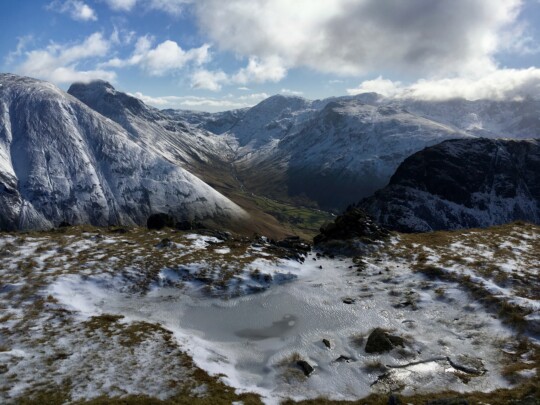 In that whole great valley we saw only one other person. Someone braver than us skipped down from the top of Yewbarrow and briefly stopped to share weekend greetings in his friendly Scottish burr. No wonder he was braver; what’s snow to a Scot? He soon disappeared around one of the many rises and we had the rising valley to ourselves, finally stepping out of the shadow to reach Dore Head in full morning light.

There the snowy hills lay all around, deep-sided drops and every surface sparkling. We spun round in joy, taking it all in and feeling a million miles from the motorway drive just a few hours prior. Here was our winter wonderland, the sun so warm, the sparkle in the snow so spectacular and every dip in the landscape inviting more adventure.

That first spectacular distant view marked only a third of our planned route. Beyond this there was a treacherous rock-gripping climb and a high peak trudge through thick cloud that spooked the dog. There was a final high ridge with drifts carved out like sandstone against ancient drystone walls and a final cold descent down a valley that was about four times the distance I had reckoned (and made all the tougher by several stumbles and slides.)

It was all memorable fun in the snow, but if we’re picking one moment of pure winter wonder, I’ll go for that joyful spinning release at the top of that shadowed valley, the sun spilling over us and glancing off the snow. We may not have a white Christmas but we can all hold on to at least one perfect snow-filled moment. 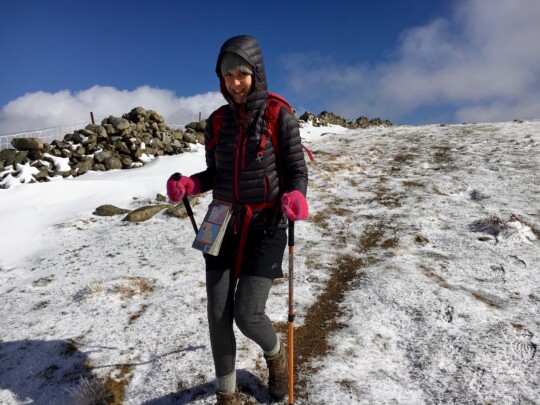