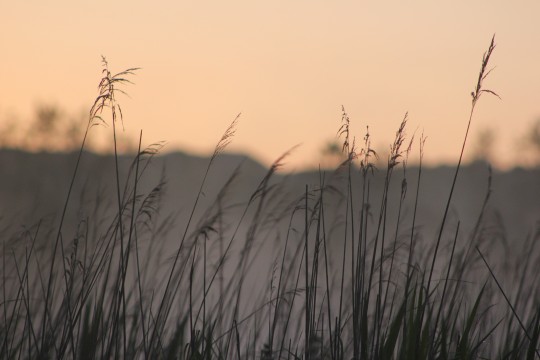 Sometimes it’s worth setting the alarm for 4am…

There will be other grey, less inviting days, when the sun hides under its cloudy duvet and so can you. But, when it’s bright and full of promise, why not get up with the birds? These are the days that afternoon naps were intended for. 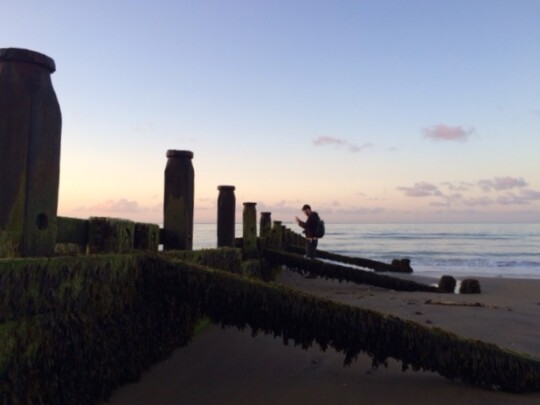 The whole beach to ourselves, quiet air, smooth tarmac, and a thermos of coffee are just a few of my favourite things. I find a bag of oatmeal and raisin cookies also helps ease an early morning start, with the promise of a bacon sandwich on return. When you get up at 4am anything’s allowed. 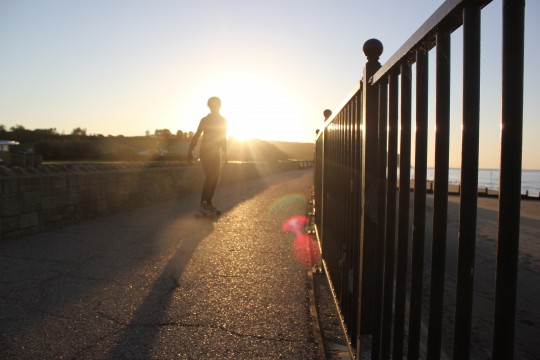 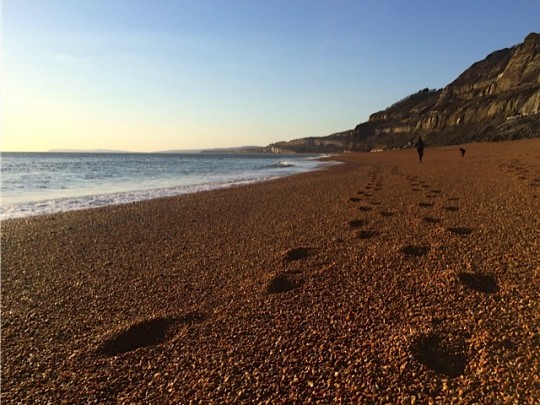 Seizing the last of the light, we found ourselves at Rocken End, the entire stretch of pebbly beach to ourselves. The beach isn’t far from the road, but it is a twenty minute scramble from the car park through overgrown jungle-like landslip. Of course, the harder a beach is to get to the more magical it is.

With picnic dinner, coffee and a long leash for Rolo, we had the most deliciously chilled time. As we wandered the shoreline, throwing the frisbee and playing around, I collected a couple pebbles for my pocket. 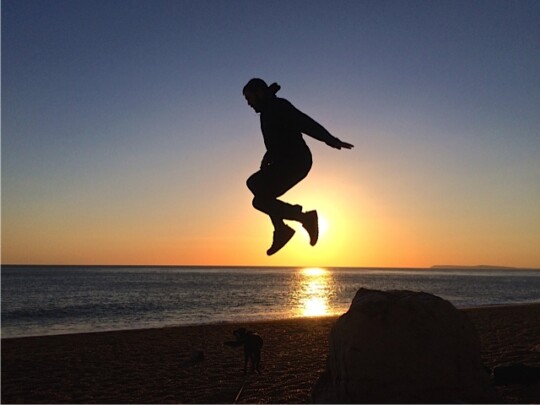 The last time I picked up pebbles was two years ago on a sunrise trip to Culver Cliff. Those stones stayed in my pocket through everything. In the middle of winter, my hands braced against a storm, or reaching for my keys on a grey supermarket run; every time my fingers would brush against that smooth sunny memory. So when the last one finally disappeared a month ago our evening trip to Rocken End seemed a perfect moment to hold on to. 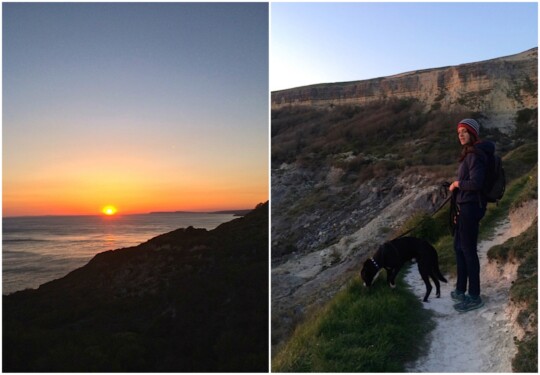 Do you collect flotsam on your travels? Ian McEwan returned some rocks to Chesil Beach after the public outcry over his beach theft. I don’t think a couple pebbles sitting in a pocket will tip the balance too greatly and carrying them with me makes me happy. Surely such simple pleasures are not the worst crime. 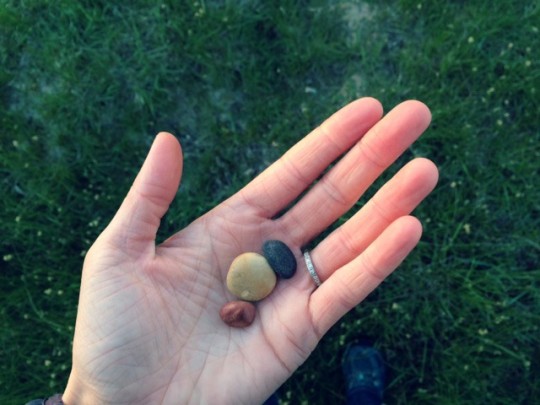 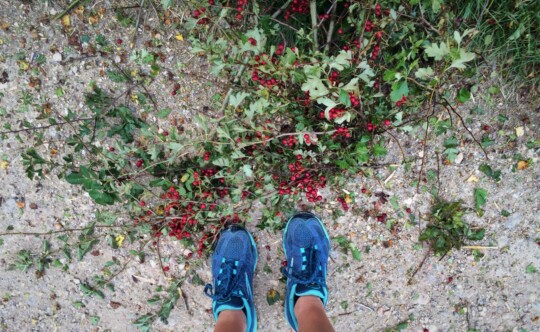 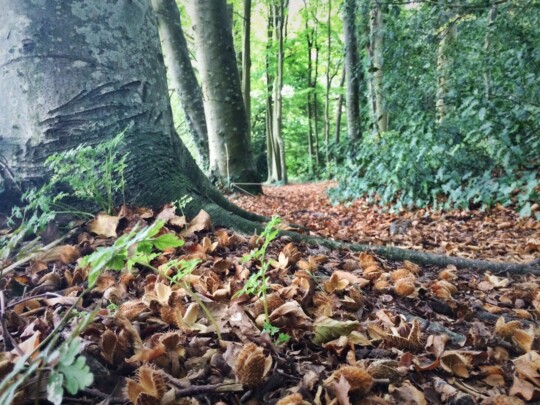 Autumn is such a great time for running around in the countryside. Cooler breezes, muddy puddles, and rich colours. The days are still long enough to catch the last light up a hill after work.

Last Friday we ran this castle route (a favourite of Tom’s). The stubbly brown fields seem a world away from the hot yellow hay of a month ago. It feels closer to the winter runs of hammering rain and shin-deep mud. Half the fun of an outdoor adventure, is returning home and collapsing on the couch with a bag of M&Ms, and it’s even more satisfying when the outside weather is a little bit tougher. This is just the start of it.. 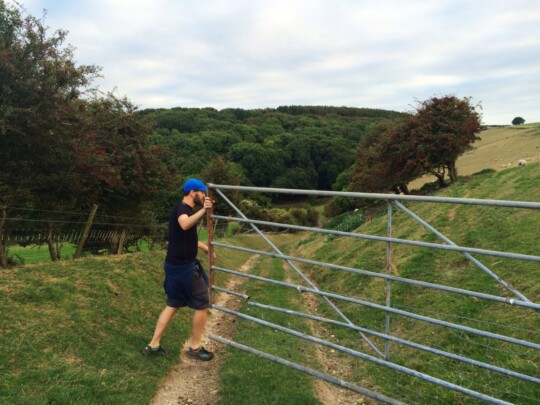 (This particular run ended at a new burger joint in town. A cold beer and a big eat; now that has to be the ultimate reason to run!) 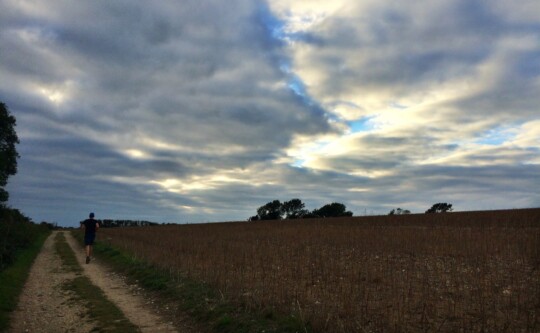 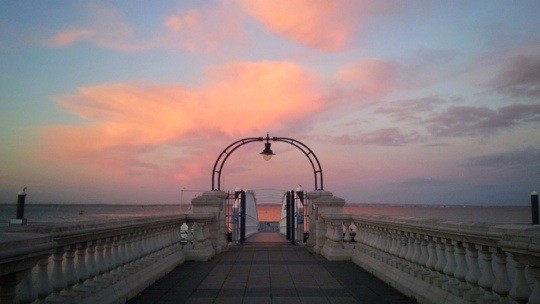 Today you’ll find me over at Michelle’s beautiful photography blog, talking about my great love for a mini adventure. Do go check it out!

Or so I told myself after having very little of it this weekend. The evenings are the most inviting part of these hot days and this weekend the outdoor air was more tempting than a bed for the night. I spent Friday sleeping under the stars, and Saturday cycling through the night. 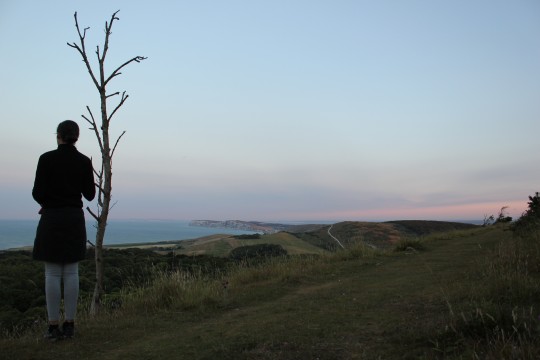 By sundown Friday we had hiked our sleeping bags and dinner up to the top of Mottistone Down, and watched the light fade. I haven’t slept outside without a tent since I was a teenager (and back then it was only an impromptu post-pub lie down). Sleeping outside is its own entertainment and, despite carrying my heavy book and torch up the hill, I was more than happy just watching the sky change, spotting the lights of boats out at sea, and listening to the changing sounds in the woods below us. We slept across the middle of what is by day a very busy path, but by night was a perfect quiet spot for two.

I woke up to the dawn on Saturday morning with a hankering for more summer nights of adventure. And so I made last-minute plans with my dad to ride the Dunwich Dynamo. That guy will never say no to an adventure. 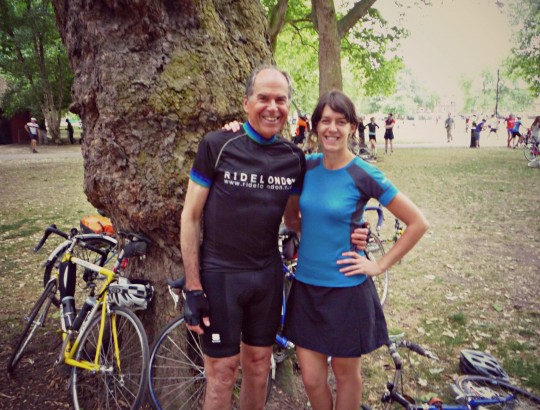 This overnight ride takes hundreds of cyclists 120 miles from London to the Suffolk coast. From the moment we started cycling across central London we were swept along in an ever-growing number of bikes, all headed to London Fields for the start line. We prepared for the ride with a can of a stout and a fresh-faced ‘before’ picture.

The group effect never wore off, as our critical mass took over the roads leading out of London, and on to the lanes of sleepy villages, people spilling out in to the road as they stopped at the pub for a quick pint or cup of coffee (much-derided by the landlords). This ride is a long way, so I left the boozing for people made of stronger stuff. I was on the sugary tea.

The roads were perfectly-sized for a group of bikes and we streamed along amongst flashing back lights, hi vis jackets, spinning spoke LEDs, and strings of fairy lights. The countryside might be dark, but there was no way you’d miss us. The just-rock-up-and-ride nature of the Dun Run creates a fabulous mix of machines and easy camaraderie. There’s nothing competitive about it; we’re all just trying to stay awake and make it to the beach. Which we did, after a few power-naps (on Dad’s part) and every last snack in my bar bag. By the morning light we piled into the tiny seaside hamlet of Dunwich, cheered on by a friendly welcome party, and availed ourselves of double breakfast- one at the beach cafe, the other at the pub. This ride is one for your diary- challenging, friendly, and a definite summer night adventure. 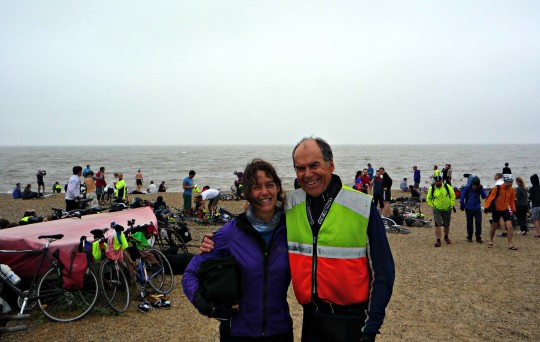