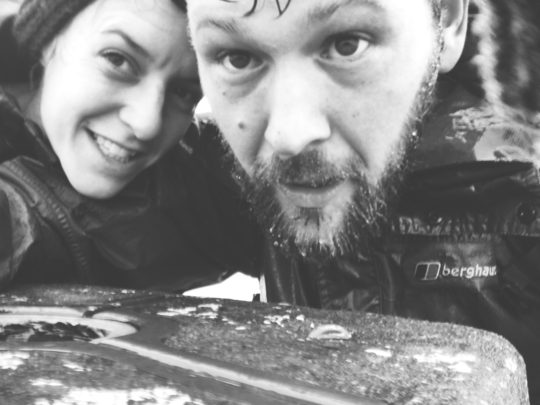 A week after our stay in Snowdonia I find myself scrolling through the Cadair Idris twitter feed, crammed with photos of glorious bright clear mountaintop views, only days after we battled through the wind and murk, querying whether this was dense cloud or simple rain that we were marching through. In the photo courtesy of twitter, I pick out clearly out path climbing steeply from the deep lake to the undulating ridge leading to the summit. On the day we climbed there was no clear path or route ahead, only dark shadows rising high through the cloud, only the immediate demands of the slick rocks rising underfoot. It’s hard to recall the wind. I recall the pockets of quiet, sheltered on the lee side of a foggy crag before pitching out in to the awaiting wind that forced raindrops through the seams of map cover and mitten.

We see barely a soul on our ascent, because of course who would be mad enough to climb on a day like this. The dogs seem to fare better on the hillside than the people: the plucky terrier in full neon safety garb, a merry assistant to the hardy men working on low path maintenance; the two collies on the high ridge, seeming more at ease here than they ever seem at the fireside, taking agile leaps over the rocks whilst their owner glumly shouts to us warnings of the peak’s grim conditions. We weren’t too worried. We knew of the old stone shelter on the summit, essential precious promise of a dry lunch stop at the top.

We felt perfectly alone for almost the entire hike. At the summit bothy, our sense of solitude was happily shattered by a convivial convergence of several parties, shaking off wet gear and exchanging ascent routes. After a quick eat, we took the advice of a seasoned climber and struck off at a vague angle through the murk, picking out sheep and cairns as we headed for an as-yet-invisible marker pointing out our route back down. Five years ago the poor visibility would have freaked me out (in fact it did, up on Kinder Scout). But since then I’ve gained enough confidence and realism to adopt cautious optimism.

We bumped our way down the steep descent, tough enough to make frustratingly slow progress. I’d always far rather climb up than down. We kept each other going with the usual mix of random song choices, a rant about nothing in particular, plenty of gentle teasing and the odd word of encouragement. Finally the low hills emerged, wispy pines atop damp ochre, while we crossed the stream on smooth slate slabs.

It always feels strange to return to the car park, the civility of the steamy cafe and the officiousness of the pay & display meter. But really I’m happy to return, not yet brave enough to spend the night in that summit bothy. Maybe next year.